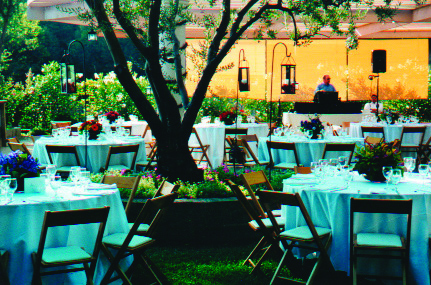 There was a time in America when “portable seating” was folding chairs made of wood. We know because PS Furniture’s original “Snyder Chair” was one of the earliest portable folding chairs. launched with the company founding in 1919. The Snyder chair was made entirely of hardwood (oak, maple, etc.) sourced from local Appalachian hardwood forests. The chair had an X-shaped frame and a distinctive wood slat seat. You’ve seen these and probably sat in them (painfully) many times. Hollywood liked to use the Snyder Chair as a prop to signify a mid-20th century time frame. In JFK’s Presidential Library, you will find Snyder Chairs as the seating chosen for a campaign stop exhibit.

In the 1960’s, portable seating began to get better and more interesting. A well-known designer, David Rowland, introduced the 40/4 stacking chair, which was the first compact stacking chair invented. As its name implies, 40 chairs would stack in 4 vertical feet. David Rowland’s 40/4 stacking chair – in addition to being much more comfortable that traditional wood folding chairs – was much better looking. Mr. Rowland’s award-winning chair was an immediate success, was briefly licensed by Florence Knoll in 1961 and was made a part of the Museum of Modern Art’s permanent collection.

Following in Mr. Rowland’s footsteps, another now renowned designer, Hugh Acton, invented the Acton Stacker® chair, trademarking the now ubiquitous Acton stacking chair. Where David Rowland’s design concentration was compact stacking, Hugh Acton’s focus was seated comfort and sturdiness. In fact, common to all Acton chairs is a level of lumbar/lower back support that was when invented and remains completely distinctive. This lower back support comes from Mr. Acton’s concave shaped seat back design merging with a rise in the rear of the seat. Hugh Acton’s design simplicity and steel tube-in-tube frame makes Acton stacking chairs sit beautifully while wearing like iron.

So the next time you sit in a stacking chair that is exquisitely good looking or perfectly comfortable, thank these pioneering designers.